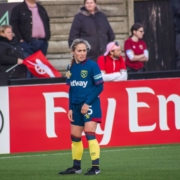 West Ham have been very supportive with my Blog. Players, family, managers, officials and fans have retweeted, recommended or told me personally they read my blog.  When the first post went up I slyly badgered a couple of the players I had become closer to into being interviewed. Well thankfully Brianna bit, after reading what I could offer. What better way to launch my sparkly new site then a conversation with our pocket rocket number 15 . I also promise no height jokes will be made.*

Firstly we get to know Bri with some quickfire questions.

Favourite food: something with truffle

Funniest teammate: is that even a question–Kate Longhurst

Favourite game this season? I think it would have to be some of the tight games with Arsenal

Any superstitions before a match? I try not to have any because I don’t like to psych myself out–but definitely coffee/iced coffee before a match

Do you know all the words to forever blowing bubbles?

Yes, come on you irons! lol (Bri did prove this at the end of the FA Cup Semi Final when she joined in with the fans after it was all over.)

Brianna is our Cali girl who moved over to the East End after impressing the coaches at the trials this season. Having been drafted to the Chicago Red Stars after a very success college career at Pepperdine University. Bri moved to London to pursue the dream to have the ability to play professionally and most importantly full time. However the United States is very different to Good Old Blighty, so how has Bri coped with the transition.

So after our conversation at the Huddersfield game ( A future blog post is acomin). I have to ask a rather vital question If Green Street (2005 film) is all you knew why did you still come to West Ham ?

Great question–while I don’t really associate myself with hooligans lol I still wanted to experience English culture and football.

Fair enough. Well since you want to experience quintessential English Culture. Have you had any East London delicacies, such as, Pie and Mash or a fan favourite Jellied Eels.

I still have not had any pie and mash or jellied eels–as much as I am a fan of sushi, I don’t think I will be able to go for some jellied eels.

You have to at least try Pie Mash and Liquor ( which is a special paisley sauce not alcohol). Since you aren’t sampling the local eateries, do you have a favourite thing that you like to do in London?

Find new coffee and book shops in London. I think London has so many different faces and neighborhoods that each one leaves me excited and usually hungry for more literally and metaphorically lol.

Definitely check out Newham Books if  you haven’t already. So having moved over from the States how are you finding the accents 😏? I know on the documentary Claire (Rafferty number 11) said that a lot of players nod and smile at Beardy.

The accents are much easier, but the first month or so was a bit challenging and I think I fell into the same confusion as some of the foreigners.

So having moved to the best part of London (East is best don’t @ me dear readers 😉) Have you learnt any of the local dialect mainly any cockney rhyming slang yet?

Yes, of course! If you have heard Matt, then you know that he even gives coaching points in cockney rhyming slang–all to which was very confusing at the beginning and sometimes needs a translation for the foreigners on the team.

So being one of the ‘foreigners in the team’ what would you say is the biggest difference between the UK and the US ( other than the obvious one being the weather).

I think the most noticeable difference is the type of humor. The U.K. is more sarcastic and tongue in cheek; whereas, the U.S. is very obvious humor and in your face.

So is there anything that you wish the Brits did that Americans do? And vice Versa?

So in the spirit of being different, what is the weirdest English thing you’ve come across.

Brianna is an attacking midfield player who is not afraid on taking any player, no matter their caliber or fearsome reputation. She has won over the hearts of the West Ham fans with her sunny disposition and firepower on the pitch. So now its time to found out what makes her tick as the player we have grown to know and love.

So lets start with the absolute basics. What is it about football you love? Both as player and a fan?

What I love about football as a player and a fan is the camaraderie and togetherness that football brings about. I was having a conversation with a teammate the other day talking about some of the combination play that Cho and I find and how football can be a universal language that trumps spoken words. It’s amazing.

With that passion what exactly is that brought you to football?
My family, but primarily my dad and brother. Both of them love sports and I always found myself outside playing football in the streets with my brother and the neighborhood boys.

For quite a young player you have had an extensively varied career, what would you say has been your biggest challenge in playing football?

I think my biggest challenge in football has been learning different types. I grew up in a vastly different football style than the English and so far this year has been about me learning how to not only play in the different system but also incorporate my own style.

What would you be doing if you hadn’t found your passion and talent for football?.

If I hadn’t been doing football, I think I would be pursuing my economics degree somewhere in California–so I guess you could say there isn’t much of a trade-off (okay, sorry for the nerdy econ joke).

What do you think is the most surprising thing about you as a player?

I think the most surprising thing about me as a player is perhaps my ability to win headers. I have a few teammates that love to “take the piss” about my height, but they always laugh when I can get up.

* So there is a height joke but Bri made it not me.

So before coming over here you trained with the USWNT in a camp a couple of seasons ago. What can you tell us about that experience? Mainly I want to know about being hit with a ball by Kelley O’Hara ( slighty loaded question as she is one of my favourite USNWT players).

Well, I didn’t get hit with a ball by Kelly O’Hara, but rather Kelly herself lol. It was an awesome experience to be in that environment. I think mainly the best part was being able to be a sponge and absorb all of the high level coaching information. I definitely appreciated some of the girls as well who were very friendly and encouraging.

Having moved across from the NWSL in the states. How have you found the FAWSL? Any major challenges you hadn’t anticipated?

I think the FAWSL has been an amazing first professional season for me. It has definitely surprised me in the level of football that has been played both intellectually and physically. I think the biggest challenge is going into an environment where everyone thinks about the game tactically and I can no longer technically or tactically outsmart a team.

To test your local knowledge: Are you aware of West Ham’s biggest rivalries and does that affect how you play in them? ( Bonus question is there any player in the league you won’t take on in a 50/50).

To be honest, I didn’t quite know who our rivalry was, but I also think it was a year for us to get our feet under ourselves as a squad and for a lot of players, come into their own. I think next year, fans will see some rivalries form, but for this year, I think most of us saw every opposition as someone in the way of our ultimate goal.

Bonus question, that has never occurred to me, but I don’t want to taunt anyone either lol.

Bri you are far too sweet ( However having seen you go after players like Millie Bright and Jill Scott, I wouldn’t mess with you). Final question, you ready. Do you think I am insane for having traveled over 5000 miles to follow the games? ( you don’t have answer that 😂).

Part insane, but part passionate. I could be asked if I am crazy for leaving sunny California to lovely England (;)) to play football but I’m passionate, so I think it’s safe to say were both passionate…or crazy lol.

Thank you so much Brianna, If you don’t already then you should follow Bri on Twitter and Insta , you should and come and support the girls in the last few matches of the season.