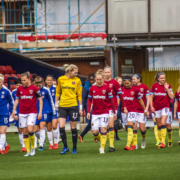 Away from our regularly scheduled program, I bring you a little passion project of mine.

In a sport that is already on an uneven keel compared to its male counterparts, the inequality amongst the league itself is shocking. This is both in terms of funding and representation.

It appears that in terms of coverage, money and just general recognition in the Women’s top league unless you are a  ’top three’ team. Don’t bother! I am aware this is ironic from a West Ham fan whose team is currently taking part in a 10 part documentary but even that was relegated to BBC Three until very recently.

I have nothing against the three teams ( ok let’s be honest here I only really like Manchester City since I was a blue for a season and I still want them to do well) but most if not all the media I read skews everything towards Arsenal, Chelsea, and, Manchester City.

Chelsea had a bad start to the season. With a lot of 0-0 draws and a heavy defeat at the hands of Arsenal, they found themselves fifth.  Their start to the season was no better or worse than Reading’s, Bristol’s or even Birmingham’s, but because it’s Chelsea, everything was about Chelsea’s ’woes’.

If a team does well against these three then it is never they played well. NEVER. It is always the three were poor or they missed chances.

A personal example would be the game West Ham played against Chelsea in March. We managed to come from a goal down to level the game. Effectively scuppering their chances of beating Manchester City to second place and all but losing their Champions League spot next season. A great angle would have been our three ex Chelsea players coming back to Kingsmeadow for the first time.
Nope, the entire commentary on the Women’s football show was Chelsea’s missed chances.  They weren’t ’missed’. Anna Moorhouse is a bloody good goalkeeper.

Even then in an article about record attendances in recent weeks said that Chelsea beat us in front of 2000 people. Not even bothering to check, basing it all on the expected rather than the actual result – a 1-1 draw.  Which I know upset our team, look at Kate Longhurst’s twitter It’s just lazy journalism.

Another consistently lazy journalistic tactic is something even I am guilty of. It didn’t even hit home for me that I did it until I was watching England v Spain game. Second half beautiful goal by Ellen White to give us a 2 goal cushion. My mum commented that it wasn’t even a city player who scored.

But it was! Ellen plays for Birmingham City ( well she did at the time of writing, she has now moved to the Manchester one). There are three teams with City in their name in our league. City shouldn’t be synonymous with just one team. So I vow not to do this even if it makes this blog clunky. ( it’s what I have proof readers for, (proof reader smiles) ). All City’s will be clearly labelled and defined.

That game also proved my point about coverage of other teams. There was a whole segment with Jill Scott and Kiera Walsh about the key players that would be involved in their semi-final. Five minutes of half time entertainment.
At the end, the ever lovely Gabby Logan did point out that there was another semi-final on the same day. All of 30 secs aren’t we and Reading lucky. We are not an afterthought!!! We worked just as hard to get as just as far.

My second point is funding. For those of you who follow the Women’s game will have seen the new injection of cash from Barclays. This came the same week it was announced that Yeovil would have to go into administration and would be deducted ten points. Effectively ending their season, it begs the question would they have benefited from this money earlier? Thisduduction has lead to them being dropped two leagues which effectively answers the question with an emphatic yes.

The financial records for each club have been recently released and apart from Birmingham City who sold a key player, no club made a profit.

The answer is probably not. As with the male game, the rich will get richer and the divide between the top three clubs will get bigger.
Women’s football loses clubs money, that is just a fact. Until we can get more sponsorship, crowds or funding we are a loss.

I know its similar in the men’s game that the top 6 get priority. However, I can and have watched West Ham play Southampton Fulham and Leicester to name a few.

When was the last time Brighton was on the TV, red button or Facebook live without them being the opponents of the Top Three?

Frankly, I would much rather watch Yeovil vs Everton in what could have been a killer relegation battle. Then the Arsenal vs Birmingham City match.  That says a lot since we all know much I love me some Ellen White.

So this is my plea for media outlets. Do better. Look at other teams, look at great play against your top 3. Look at not as an opportunity lost but an opportunity won by the other team. Focus on other games and players. Look at who is up and coming. Remember its not a three team league.