So my mother and I got our wish and we drew Huddersfield in the cup. Well, half of it as it was another home leg. Great for all the local fans, not so great for this wanderer. Another trip on the M6 beckoned.

Due to the last minute tie, it was going have to be a coach both ways since I couldn’t face the soulless road twice in one day, my darling bestie for was in for another call. Hey as her mother says this football has done wonders for our friendship as she sees me more than twice a year now.

Huddersfield was an unknown entity for me. With most teams I have an inkling on how we might fare. They had been fairly consistent in the northern league but they hadn’t faced any WSL opposition yet so it was hard to tell how they would deal with a full-time team.
It would remain to be seen if they would go in hard like Manchester United had or if we could wear them down like we had done with Blackburn. We were also missing some key players as Raff had been injured at Blackburn and Adriana Leon had been playing with a minor hamstring tear since we signed her. Still, the faith was there that we could progress to the quarter finals.

On what was a balmy day February we were ready to take whatever they wanted to through at us.

Nervy start for both teams this match, with the quarter-final place at stake. It was the visitors who capitalized on the pressure first. A penalty was awarded against Anna Moorhouse for a foul save on edge of the box. Huddersfield’s captain tucked the ball low sending Anna the wrong way.

’that was a soft pen if I ever saw one’ I look up at the old boy next to me. I couldn’t help but agree.

I think the penalty shook our girls slightly as to go behind so early was not part of the plan. Our defence got tighter, Anna had more control over her back line and the wingers were snuffing dangerous plays much quicker. But we knew we needed a goal to bring our confidence and quickly at that!!!

We didn’t have to wait too long, Kate Longhurst torn through the Huddersfield midfield and shot a powerball from long range. This was saved by the Huddersfield goalkeeper only to fall at Lehman’s feet, with a neat flick got the ball back to Longhurst who didn’t miss the second time.

We became hungry after that, like a wolf taking their first bite, blood lust was brewing.
It didn’t take too long for the second. Leanne Kiernan back from injury proved her worthy of a first-team place. A perfect cross from Alisha Lehman, led to an unstoppable shot in the top corner from the Irish youngster Kiernan.

When you wait for a goal then three come at once. This time Kiernan turns from scorer to provider, in a direct reversal from the last goal with Lehman managing to squeeze the ball past the keeper into the net.

3-1 and we were in cruise control but 3-1 is a dangerous score line. Many teams become complacent and slip up, we didn’t want an Aston Villa/ Sheffield United on our hands.  https://www.bbc.co.uk/sport/football/47083170

Jane Ross put paid to that fear three minutes later with a screamer of a goal close range. There is a reason she is the fox in the box. Now we were truly flying. 4-1 to the cockney girls.

Buoyed by the result half time was quite a joyous affair. The old boy who had stood next to me had gone to get a cup of tea ( more fool him) and I frantically been updating mother and Crick on our reversal of fortune.

’ Get to many of these games?’ I look up slightly blinkered from the natural light rather than the glow of the screen in my hand.  The old gent had come back with his tea.

’oh yeah, season ticket holder. Home and away you will find me there.’ I smile.

’ this is my first one, but I am betting I have seen more woman’s football then you’ve had hot dinners.’

Now dear readers I have to admit I scoffed at this. As someone whose entire holiday allowance goes on travel for these games. Forgive me for being skeptical.  He must of seen the bemusement if not the cynicism on my face. As he felt the need to explain.

’ my wife used to play for Leyton Orient women back in the day. So I used to run the line for her games, so we could still spend time together’

Well, consider myself schooled!  We ended up having a great talk about the history of the women’s game and who were the big players in the league back then. Lots of love for Coventry City here.  Half time just flew by, I hope he comes back for another match. He seemed to have enjoyed himself.

You would be forgiven to think West Ham would be resting on their laurels. Play the defensive game and try and hold Huddersfield back. You would be very wrong. We were hungry for blood and we would not be settling for a measly 4-1. ( Disclaimer we totally would settle for 4-1 in any game at any given time, I was using poetic licence).

19 minutes into the second half Rosie Kmita came on for Jane Ross. 20 minutes in, she had got our 5th of the day. Another case of bait and switch as the Huddersfield team focused on the threat on the left wing, Rosie sprung on the right. Top corner, it was in the back of the net before the keeper could blink.

Credit to Huddersfield who continued to give us a game despite what was undoubtedly a demoralizing score line.
Their little spate of possession was quickly snuffed out by a brutal sliding tackle in our midfield. This led to the Huddersfield player being down for a while.

I didn’t see who made the tackle but the old boy next to me was fuming.
’ They are trying to put it on Number 12, nowhere near. She was nowhere near’

’Ah’ I smile ’ Yeah see with being Kate it could well have been. Not backwards in coming forwards is our midfielder’

On an unrelated note, this is probably the best photo I have seen from a match day. Don’t mess with our number 12 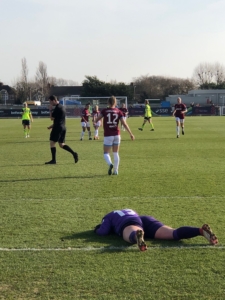 Soon the ball was back at our feet and the little dynamo on the score sheet. Brianna performed what can only be described as an act of wizardry and shot from an impossible angle. Over the hills and far away we are one step closer to Wembley.
6-1

’Are they just taking turns to score, Next you will be telling me it was Moorhouse’s go.’ Hey Anna’s goal kick is pinpoint and her distribution is stellar, so you never know. Crazier things have happened in this game. Still 6 goals with six different names on the score sheet, looking strong.

We got our first repeat offender at 81 minutes when Leanne fired a rocket at the Huddersfield keeper. Despite a valiant attempt, it was 7-1.

3 minutes later she was back at it. This time the keeper got a hand to it, but couldn’t save the rebound as Leanne taps in.

It was at this score we finished the game. An emphatic 8-1 win. Commiserations Huddersfield but through to the quarter-finals we go.

Back in the clubhouse getting a well-deserved beer.  I was greeted warmly by a very vivacious American, decked head to foot in claret. I mean she put me to shame.  Pamela Hendrix was Brooke’s mother and come over for a couple of games. I learnt so much about our number four over the course of a swift pint, turns out she is a Georgia peach and comes from the same town as my favourite USWNT player Kelley O’Hara. She has also played in an insane amount of countries.

Pamela also has the knack to pull anyone into a conversation and I found myself talking to Jane Ross properly since her move over to our East London family.  I reminded her of my favourite moment in football ( See blog one). Brooke who had also joined us laughed as Rossy went bright red.

’ Did it end 1-1, that game. Yeah, I think I know the one your talking about’ She also told me I was mean for sending my City friend crazy pictures of her in her new claret and blue uniform. However, she says so with a twinkle in her eye, that makes me think she truly finds it funny. I later found at the end of the season Rossy has a wicked sense of humour and did indeed find it funny. More on that later.

Probably the most informative conversation I had was with Brianna. Talking about how the women’s game is portrayed and how the players feel about it is an eye-opener. How the women’s games are always shown as family friendly. Which for me was a positive as it allowed for the passion grew for young girls without the aggression. However, as Bri pointed out it made the game seem soft and not as physical as the men’s. Therefore not as important or skilful.

The most important factor I learnt is that Bri thinks we are all a bunch of thugs. 😏  well, only really but she did admit that all she knew about West Ham she gleaned from the film Green Street. Yes, the one with the terrible and very unrealistic football hooliganism  ( I mean in what world would Elijah Wood take on some tanked up footie fans. He’d get squished.)

Which beggars one vital question really. If that is all you know of the Hammers why do you agree to play for us?

Nah we are lovely really, very accepting we even allowed a ’Docker’ as a captain. ( Sorry Gilly couldn’t resist )

With those parting words, I left Rush Green once again to face the devil’s highway.

Next time it’s down to reading to cross another ground off my list. Me and Ed try the meet on a train thing again and I am grateful for

Follow Me!
You’ve been replaced how does that feel.

At least it’s not High Wycombe
Scroll to top