Two matches in one week, to what do I owe the footballing gods. I am joined on the road by mummy dearest again. Though she would like it to be known that anything I report her saying is taken wildly out of context. Like all good storytellers, I take a kernel of truth and embellish accordingly for my own selfish purposes.  I however, think I make her even more hilarious. But each to their own.

This time we are only heading a little down the M6 to Birmingham, well Sutton Coldfield to be technically specific. I was trying to show my mother wonders of coach travel. Yes, it takes a little longer but it’s cheap, gets you were you need to be and it gives you great blogging time. Ok, that’s an advantage only to me. If I can convince mum these things are true, I might get more company.

However, National Express why won’t you let me have nice things! You had one job, get us to Birmingham on time. I can’t let my mother be right. Again!! It had started oh so well and we had made good time chugging along the M6. We were sailing passed Walsall stadium a whole hour before we should have been. However, I had forgotten what March 17th was other than match day.

After the not magical but very mysterious hour tour of Birmingham, I did not want or require we are finally off the coach. An hour later than we had been promised. I was fuming, so much so I did not say thank you as I got off the coach.  Yes, dear readers, that’s how angry I was.😂

’RIGHT’ I bellow at mum, ’If we bomb it up to New Street, we should make it on the last train before kick off.’

There is nonetheless no bombing it anyway in the middle of a parade. People are more concerned with lurid fluorescent green beer and taking advantage of the unofficially relaxed street drinking laws. Then you know getting out the way. It became abundantly clear, we weren’t making that train.

’I bet you’re not even Irish’ my mother seethes at a particularly drunk Brummie. They looked at her like she had grown three heads but still did not move.

Thankfully Uber could come to our rescue, with a guarantee to get us to the game on time. If we could find a place away from the fake Gaelic crowd. A more expensive route nonetheless a guaranteed route.

Our driver was actually super delightful who tried to engage with us even though he didn’t really follow the sport. Props to him for knowing Birmingham City had a women’s team and that it was a world cup year. He also gave us some great recommendations on some curry houses in Manchester.  More importantly, he got us to the game with 10 minutes to spare. (Somebody got a 5 star rating a tip)

St Michaels at Boldmere is an odd ground. It’s by far the most bizarre ground I have been to, I am even including Birmingham City’s. Which is so close the Birmingham International Airport’s runway, that one game I went to was stopped because the fourth official had air traffic interference on their earpiece. So maybe it a Midlands thing to have odd ground.

Aston Villa’s ground looks part leisure center, part working men’s club and part bowling green. It also feels they couldn’t decide what they wanted it to be and half-built all three.  There is only one stand for seating which is only 6 rows deep along four blocks. The standing around two sides of the pitch is on a high rise which only allows fans to stand single file, resting along the barrier. This also gives the impression that you are staring down at a sunken pitch. 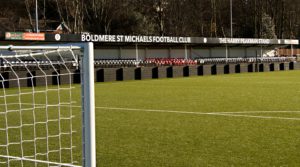 The West Ham clan ( well Geoff, Mark, JT, mum, and me ) decided to stand on the High Rise behind the goal. Along with Jack Sullivan our teenage wonderboy director. He might regret this decision.

As with our previous Championship opposition, Aston Villa wanted to play physically. Using their considerable height advantage over our slight players, they pushed West Ham to the middle so we couldn’t play our normally advantageous system on the wing.

Villa had the first shot of the game with Jodie Hutton narrowly missing out on giving Aston Villa the lead. Between Moorehouse’s quick-reactions and a slight deflection meant the Hammers were safe for now.

Serving as a wake-up call, the girls in dark blue ( for today anyway)  took their chances. Shots from Cho,  Leanne Kiernan and Alisha Lehman  all scraped the crossbar.  Each time we got closer.

It was a lapse in judgement from the home side that allowed us our lead.  Despite confining us to the middle of the pitch for most of the half, they miscalculated how quick Ria Percival was and did not mark her during a West Ham goal kick. A run down the wing led to a cross to Leanne who’s pinpoint shot was punched away by the Rodgers the Villa keeper, only for the ball to land at Jane Ross’s feet and she managed to catch the keeper out, her strike sending Rodgers diving the wrong way.  The fox in the box indeed

The game remained pretty even for the rest of the half with neither side really testing each others backline. Quick movement from Villa was met with quicker movement from Anna in goal which kept the score in West Ham’s favour at the whistle.

The Aston Villa fans hadn’t stopped singing since the first whistle so we retaliated with another out of tune rendition of blowing bubbles. We got a very sarcastic round of applause from the opposition, we also seem to have lost Jack at some point. Told you he might live to regret his standing decision.

The weather on this March day had been unpredictable to say the least. So far it had rained, snowed, been a heat wave and now it was hailing. At least I had to the right coat on this time. Behind us were some smaller astroturf pitches with some kids having their traditional Sunday kickabout. This was going to get confusing.

It was announced as the teams trooped back on that Matt had  made some changes. Leon and Longhurst off for Visalli and Reichardt.
Geoff just shook his head

This second half was a real test for our backline. As Villa had been the unfortunate first opponents of Manchester United’s new team, a 12-0 drubbing had put a massive dent in their season and this was their last chance of silverware this season. You could feel the want and passion from the Championship side and the onslaught was relentless.

The partnership between Gilly Flaherty and Brooke Hendrix had never been more vital at the heart of defence, nor had I seen it as strong. The connection between the two lead to some quick thinking amongst the back line, allowing Anna the thinking time to make crucial saves.

Jodie Hutton definitely tried to slice our midfield in half but we held strong.  Offensively Leanne almost put the game to bed, her strike just wide.

In the end it was the early strike by Jane Ross that was the deciding factor.

We were through to the Semi final. Now, all we could hope for was a favourable draw.

The turn around on that pitch was immense and we were soon surrounded by middle-aged men aggrieved that they couldn’t get into the changing room for their walking football tournament, because a bunch of girls were still in there. Told you this ground could not decide what it wanted to be.

Back in the clubhouse, we await with bated breath two results. On the TV in the Men’s FA Cup Brighton and Millwall were down to penalties. In a room full of West Ham fans no one was cheering on the latter. Except for our captain, possibly😏.

The other was the last quarter-final match between Manchester United and Reading. The other two had finished as expected with Chelsea and Manchester City winning theirs.

The Reading game, on the other hand, had Dramatic last-minute goals which led to extra time. In a twist that could only happen thanks to the magic of the cup. Reading got a last minute scrappy goal over the line and the final four were complete.

As we were leaving, the coach pulled up and I saw Gilly getting ready to head out.

’Hey, Gil’ I shout after her. She looks up and smiled.

’Alright Trouble, made it then.’ I nod and point at my mum.

Thought you might want to meet the woman whose heart I am breaking next season with my shirt selection. Though I think you might’ve won her over. She voted you player of the match.

Gilly laughed ’ just tell her I am a West Ham player. Forget who I support’  I nodded and with that left her be.

After a long day, we headed back home on the coach. Hoping by tomorrow’s breakfast, we would have the match we wanted.
Of course this time the coach ran as it should. Not like when we actually needed it to.

Next time, some of our players face their old compatriots, I lose the best daughter award and I get some love back from the club.

Follow Me!
Is there an age limit on being a ball girl?

Where are all the West Ham fans!!  Good question Tess.
Scroll to top