The most common question I get is why do I travel the way I do?

Especially midweek, and especially when involves taking time off work to do so! The simple answer is: There is nothing quite like a live game of football. Yelling at the Ref through your laptop does have the same emotion. (Nor do your neighbours appreciate it) So for the sake of societal cohesion and making sure my rent doesn’t go up, I travel to the matches.

SIDE NOTE -Crick called me a terrible influence as she wasn’t going to go to Manchester City’s midweek game until I talked her into it. To be fair didn’t take much persuading.

It had been over a month since the Reading game and I was getting withdrawal symptoms from no football. There was however a potential foil to my plan. Storm Marcus was sweeping the North West and was threatening to kibosh my travel plans; Trains and coaches were being cancelled,  along with most of the championship matches. Here’s hoping Rush Green’s brand spanking new under pitch drainage system lived up to the hype.

My journey was actually pretty uneventful and we only had a slight slow down in Milton Keynes. On the train, itself was a different matter. Braving the train toilet, once again to get into my civvies after leaving work on a half day’s holiday. Clutching my trusty black backpack, I pass the train conductor as I head in. He looks at me and smirks.

’ Ooh bunking off are we’  I look at him confused.
’ No, my boss is very aware of where I am, Mate’
It was his turn to look perplexed.

It wasn’t until I sat down that it hit me, he was hinting that I was a runaway school girl. Granted I was wearing, white shirt, black trousers. But my school days are long behind me. Sadly I wish it was the first time this assumption has been made.

Because we seriously had not learnt our lessons from our previous attempt. Ed and I decided to travel to Rush Green together again. We weren’t meeting on a train this time just the station, so what could possibly go wrong. Well, my dear readers do you know how many entrances King Cross has. So when Ed said he was near the entrance on the Euston road of which there are three. Yup even with Ed’s ever helpful directions we still ended up missing each other.

Then came the debate on how to get to the ground. Ed’s plan was a convoluted three change tube via Liverpool Street and a bus jobbie.

You can tell Ed is not a Londoner. ( if you are not a Londoner your self dear reader, take my word for it that Ed was very very wrong). Ed was not a fan of my master plan in the routing  as he had had some bad experiences in Barking. Highly offended due to this being my old stomping ground, I told him to not be such a softie. It might be a crumbling manor but it is still my crumbling manor. After someone tried to brick the bus, then the driver refused to move for 15 minutes as some kids skipped the fare. Ed may have had a point.

We arrive at the ground early and run into my staff member friend. ( I know him well now but he likes the ambiguous nature of ’Staff Member’). He was leading a group of small children to go get kitted out for their matchday duties.

’ No No, you can do better than that’  I was then deafened by many small and excitable children shouting their greeting. It was echoed around 15 minutes later when he got them to say goodbye. Nearly dropped my pint over myself. Thank you ambiguous staff member for that one 😒😊

It was now time to face the storm from the North West.

I am nothing but honest about my team, it was not the greatest game we had played. I partly blame to weather, well I blame the weather a lot.  Plays which have worked in the past that should have worked didn’t. Sloppy passing in the middle falling short. It’s hard to tell if it was the team or the wind carrying the ball away from the intended target. A lack of communication also seemed to be an issue. Everton packed the box, so we couldn’t run the ball through. However, instead of running around the sides to ping the crosses in, we seemed just run at them. What should have been a ball over the top to Kate Longhurst ended in Leanne Kiernan  being smashed by Gabby George and a very frustrated Kate. We had one solid chance this half,  a corner played into the box, after being pinged around a few head, falls to Gilly. She tries to smash it home but it is comfortably gathered by the Everton goalkeeper

The documentary crew are wandering around to get some reaction shots of the crowd. As they walk past the start naming us after the episodes we appear in, mouth almighty indeed is episode 3.

Talk amongst us turns to the quarter-final against Aston Villa on Sunday.  The FA Cup is our big shot at some silverware this year, to get  the semi’s would show some serious intent. Whilst Villa on paper we’re one of the easier ties, the FA cup is a completely different ball game.

We needed to pull it together this second half.

It just wasn’t meant to our night. Everything we tried just didn’t pan out. We as a whole are a little team, physically not in mentality. So any time a team puts us under the closh through brute strength, we crumble. We like to play clever; tricks and flicks, dummies and nutmegs. Gabby George barreling at you, going in for a very forceful tackle does not work for our game plan. Again it was a half of frustration and Everton were looking dangerous.

The inevitable happened at 88 mins, a slip in midfield meant Everton were one on one with our keeper. A looped ball went over Anna’s head in the centre of the box and the visitors were one goal up

Which is how the scoreline stayed not for want of trying. The most entertaining moments of the match were to do with disciplinary action than the run of play itself.

Our resident bruiser Kate went in for the tackle to get the ball from the Everton keeper. The ball went out, both claiming it was theirs. Kate was less than pleased when the decision did not go her way. She showed this displeasure firstly at the goalkeeper then the linesman then back to the goalkeeper. ‘Till she remembered that she was one yellow card away from a suspension, you could literally see the switch flip and abundance of apologies followed. I dunno if that made it worse to be honest.

The second incident was at the end of the game in the dying seconds. Due to a mistimed tackle by Gabby, we had 6 minutes of injury time. Boy did the Everton goalkeeper milk it. In a move worthy of Siobhan Chamberlin, she practically crawled to get the ball that had gone out for a goal kick. Everyone was getting frustrated, fans and players alike.

It took the crowd booing, yelling to the ref to sort it out. I am absolutely convinced that’s what woke the referee up and she got a late yellow. Now I don’t condone the booing of players but I also believe in good sportsmanship and that behaviour was not. Though as a wise friend once said, is it fair play no. Do you wish you had thought of it, Yes.

I stood waiting for our captain to come off the pitch, after all I had exciting news for her.

’ Hey Gill, I am gonna be breaking my East London mother’s heart next season. I am getting a Millwall fan on the back of my shirt. ’

It takes a minute but her eyes light up and she starts to laugh.

’ You better you f***ing better. I have seen your Twitter, you’ve got Raff, you’ve got Bri and who have you got on now’

’ If you get my name on the back of your shirt next season, I will give you something special’
She later came back and promised me something really special.  I love you anyway Gill, but I do accept all bribery and compliments 😏.

Raff and Becks came over for a quick hug and noticed how cold I was. I got reprimanded quite severely for not having the right coat. 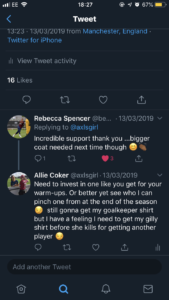 I head back into the clubhouse and catch up with Geoff and his wife. I managed to angle my second pint of the night thank you Geoff.
Whilst dissecting the game, I mention whilst I had been researching for this blog. I found a video of Kate scoring in the FA Cup. A very blonde Kate scoring passed a very young Becky Spencer . The Goal

Kate’s mum started to get very animated about what had happened after that goal. Some unfair sportsmanship from Birmingham City and the referee meant Chelsea conceded the FA Cup.
’ You’ve started something now’ Geoff laughed its still a sore spot’.

Now for those of you who have not been to Rush Green, the clubhouse has that feel about it. It has a makeshift bar and Fussball table and seating. Unfortunately, Bri had chosen to sit by the table.

Geoff turns to me and Kate and whispers
’ Oi, someone needs to tell Bri, she needs to get back on her pitch’.

I just about manage to stifle a giggle but Kate decides that person should be her.

’Oi Bri, Dad says you need to go back on your pitch’  Bri confused looks at our little group until Kate nods at the Fussball table. Bri clocks its a height joke and glares at us. For all of two seconds ( you are too forgiving Bri 😏) she comes over to show us a photo to prove her point. 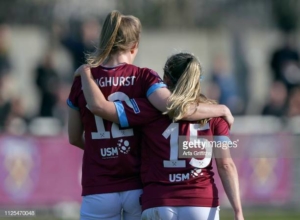 It has been previously established that Kate whilst not short is no Jill Scott. However next to Bri.  Well, you can see for yourself.

Finally, it was kicking out time, Geoff had kindly volunteered to drop me off at the station.

Not before we ran back into my good friend ambiguous staff member.
’Hey, is there an age limit on ball girl, coz I can sit on a stool and run after a ball’.

He looks me up and down and laughs.
’ you want to be a ball girl, I can make you a ball girl’

I take back the joke, I do not doubt for a second he would make good on that promise /threat.

And that concludes that epic adventure boy it was a long one.

Next time it’s down to Aston Villa where we get waylaid by some fake Irish men, get confused by the other claret and blue and serenade Jack Sullivan.

Bet You’re Not Even Irish!!!
Scroll to top