Next payday you need another shirt

January was not a good month to be a West Ham fan, both in the men’s and women’s teams the post-Christmas slump well and truly hit so these match’s reports won’t be as extensive as I don’t fancy depressing myself again.

ok apparently I prattle on a lot, so this will be probably another two-parter.

No Borehamwood for me this time, it was our turn to host the potential champions. Due to Arsenal’s lofty place in the league, we had the dubious honour of being the BBC match of the day. Well on the Red Button anyway. Still progress people, it’s all still progress equalling an early kick-off at half 12.

Wisely I again decided to go and stay with my sister from another mister in Rainham and had a football-free Saturday catching up. Well sort of. Mary Earps had announced she was doing a video chat that night and having been the attentive best friend all day, I had convinced Laura to let me watch.  I had asked Mary a cheeky question if she still thought I was insane for my travels.
She was very sweet and confirmed that I was indeed crazy but a lot of clubs would love mad fans like me. Insert super fangirling.

I decided to debut my Christmas present which was the away shirt with Visalli 15. Thank you, mum and dad. Walking in I took my usual spot by the lower right corner flag and I waited for the gang of claret and blue fans I had amassed. Ok, Ed and Emma, I was waiting for Ed and Emma.
As West Ham were warming up, Bri spotted me and waved, I waved back and pointed at the new shirt. She seemed quite made up and told me we were getting a photo afterwards.

And who am I deny such a request?

Still no sign of the gang so, I go for my customary bad tea. ( why, dear readers, why am I such a masochistic.)  In the queue I spy  Mollie Kmita (ex-West Ham player and photographer extraordinaire) with a long order of her own.

She smiled at me with recognition.

’ Hey, how are you doing. What time did you have to get up this morning? ’ I laugh telling her I had actually been sensible this time.
She noticed my new shirt and laughed.
’ Don’t you already have the Raff one’

I nod and tell her about my Longhurst one as well.  She looked mockingly horrified.

’ Don’t tell me that, where’s your Kmita one.’ ’ you need a Kmita one. Next payday you need another shirt’

Sure Mollie, I have run out if shirts so unless it goes on the goalkeeper kits.’

I later told Rosie this story and she no sympathy, telling me I did indeed need a Kmita shirt. I promise Rosie that if you are still a Hammer next season, I will have a number 16 shirt.

Right the gangs finally all here on with the match.

Jane Ross had found fine goal scoring form and managed to surprise Arsenal on the counter. A long ball by Spencer back in the net found Lehman who worked her way around the very tight Arsenal defence. A pinpoint cross from Lehman finds Ross who found the bottom corner. A sweet strike on her left foot and we lead.

We were playing well, quick on the counter pressing Arsenal. We are playing like a team not be underestimated.
After another 7 mins and Arsenal beg for a penalty after Beth Mead comes up against our captain fantastic, Gilly with a fearsome sliding tackle. The ref doesn’t agree with Mead’s protestations and no pen is given.

Gilly was actually on fire this half and again a flying block stops an almost certain goal. West Ham are getting nervy now. Arsenal were ramping up the pressure, showing the true quality of there side.

After 26 minutes the inevitable happens. Leah Williamson knocks in the rebound after a Beth Mead power shot expertly saved by Spencer, not even the best defence could have cleared that.

5 mins later its deja vu as Mead takes another shot at goal, pushed away by Spencer only to found another Arsenal players head. There is the reason why Arsenal was on such league run. This time it was Jensen who took home the spoils.

We kept pushing, but we just couldn’t stop losing the ball in key areas. We just couldn’t finish as clinically as I would like. As the BBC reported we didn’t seem to have a midfield per se. Our players just ran up and down the pitch. Like all of them, at the same time.

Suddenly just before half time, Visalli heads the ball upfield. Allowing Ross to cut across the Arsenal defence and gets both the team’s and her second of the day. Again a low shot into the bottom left hand corner. This time from her right foot. It’s good to have such a versatile striker.

It was end to end at the beginning of this half but as painful as is to admit Arsenal had us on the ropes. Defensively Gilly and Brooke were tight with Becky, but Arsenal were relentless and it was only a matter of time before they broke our back line.
Danielle Van de Donk at the far post, Arsenal take the lead once more.

10 mins after that Van de Donk goal, she becomes the second player of the day to get a brace. A mix up between defender Brooke and goalkeeper ends with an open goal and what is essentially a tap in.

And that’s how the game ends and Arsenal march their way back to the top of the table. We had patches of great play but I was definitely confused by one element of our style of play.

I am not a footballer, but our insistence to play from the back no matter what doesn’t make sense to me. If Kim Little is rushing at you lob it up the pitch and deal with the resulting throw in. But then again, what do I know.

After the match, I headed to the club to wait for Bri for the photo she so desperately wanted ( ok I desperately wanted) drinking good but slightly warm IPA. Our clubhouse has a little while to go before its at Birmingham City level.

When Bri came out I assumed she would want a photo like Raff did so she could show people I had her name and number. Well, we took that picture even though Bri looked rather confused. 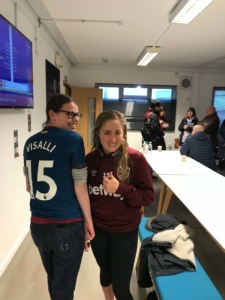 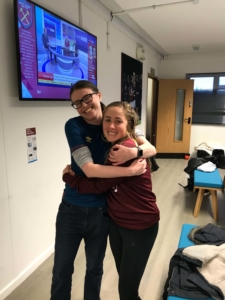 I think it’s safe to say since our first picture me and Bri have got a little closer. 😏
With that, I was on my merry way back up the blessed M6.

Next game came quite quickly as it was Wednesday of the same week. I mean you wait for nearly a whole month for a footie match had three come all in the same week.

This was for a place in the Continental Cup semi-final. Manchester United were a new team that were just a major juxtaposition. They had gone into the largely amateur lower tier with the idea to work their way up to the top flight, they had been dominating this league with promotion now an almost dead cert.  They do have the advantage of being the only professional team in their league, and they nicked half of Liverpool’s squad. This was not going be a walk over.  For more information on that read this brilliant Suzanne Wrack article.

Midweek games are tricky to get to. I normally have to take an afternoon off to navigate some random transport system, to be taken the wilds of some small town which not even in the same county as the parent club.  Except having just started a new job, I didn’t have that luxury. Luckily Leigh isn’t too far from Manchester and I would only miss the first 5 minutes of the match.

The football gods were smiling on me for this match. Having a football-mad trainer ( he is a Liverpool fan but we will forgive him)  he allowed me to sneak out 15 minutes early to make kick off. Leigh Sports Village on the other hand  is another in the middle of nowhere ground. 20 min walk from the town centre, across a motorway down through a housing estate and  then you suddenly see floodlights.

Once again back with me was mum and dad so I wasn’t totally alone in a sea of red and black. There were pockets of us all over the stadium.

Manchester United were unlike any team we had faced. Far more physical than any other team we had faced.
A quick goal conceded early shook us and we never really recovered. The goal is kind of contentious as I am sure our player was fouled before their run up. No dear reader not sour grapes, last time I checked you can’t pull a players shirt to nick the ball. Once again we tried to push our way back in the game and lovely long range shot from Kate Longhurst narrowly missed hitting the top bar.

Manchester United’s second goal is one of contention as well. A foul on Jess Sigsworth by Brooke Hendrix led to a free kick and the second goal. The contention comes from the fact Brooke was retroactively punished for three games. The foul was unintentional and in my unbiased opinion was not worth the match ban. Even if she might of accidentally stamped on Jess’s back 🤷‍♀️.

But we were outclassed and our Cup run had come to an end. It was quite heart-breaking. It is hard to write about this game without sounding sour.  But this game really brought out the inconsistency of the refereeing in the woman’s game. On both sides, if Brooke was penalised for her actions then why wasn’t Martha Harris punished for shoving Brianna to the floor. Why weren’t they punished for doing a Greenwood special of taking yardage with the throw-ins? It was a frustrating game.

I did, however, my usual of frustrating the young children winding up a young family in front of me. For 90 minutes I did not stop chanting for my team. I reached a new level of obnoxious that they moved at half time, my mother looked rather embarrassed.
After the match having a quick chat with Raff, she asked if it was me that had been shouting “Come on you Irons”.

Both Rosie and Bri confirmed they could definitely hear me which mum apologised for. But Rosie shook her head.
’ its what is all about. The passion ain’t it ’.

After the long game, it was a long walk back to Leigh and a cold wait in the bus station. Three buses later I was finally back home. At least I avoided the M6 this time.

Next pay day you need another shirt : Part deux
Scroll to top