I got the idea back in September, but it’s taken me to the New Year to get going with this.

I’ve been called crazy ( Although for someone who moved out to Germany for football, you’d think Mary Earps would understand 😉 ). Others call me dedicated. My bank balance just groans. But home or away, I follow the Claret and Blue Army everywhere.

“Where the hell’s Borehamwood”, or the adventure of my first match.

I followed Manchester City Women last season. Religiously. I had missed live football and after our brilliant performance in the 2015 World Cup, I decided to follow Women’s football. It made perfect sense as City were local and boasted a lot of the international talent whereas West Ham’s women’s team were a couple of tiers down in the Southern conference. With home games in Thurrock and Hornchurch and a non-driver, it just wasn’t feasible.

As with that Dagenham match, I remember everything about my first City match. Manchester City vs Liverpool. The excitement of seeing the England players I had cheered on, sat up late, in the dark, volume turned down low so as not to wake the parents. Watching Bronze, Houghton and Scott was something special.

Side note: one of my favourite moments in the game occurred when Liverpool went one-nil up.   Liverpool‘s goalkeeper, Siobhan Chamberlain, was understandably taking her time to retrieve the ball for her goal kick. City’s Jane Ross (who is now a proud hammer) ran half-way up the pitch and placed the ball in front of Chamberlain and made it very clear she was to kick 😂.

I made great friends with the Manchester City crowd, travelling not just over the country but around Europe following the Women. The adventures we got up to are worthy of an entirely separate blog.

I’d made a promise to myself though that if West Ham Women ever became more accessible for me then I would go to the iron side (see what I did there 😉). With the restructuring of the WSL this season that became a reality and with a heavy heart I left my adopted City family to brave it as a lone Claret and Blue wanderer.

The first issue was, as much as I knew I was a fan, no one else would without a kit. I wasn’t going to make any friends at Rush Green with my old ‘Christiansen’ City shirt, right?! But whose name should adorn the back of my new West Ham Women’s shirt?

Mum was plumping for Ross, having known her from her aforementioned time at City. However, it sort of felt like rubbing salt in the wound. Ross was well-liked amongst my group and they were sad to see her go. (I was ecstatic she came to us, I just celebrated quietly).

My choice was Claire Rafferty. I had a soft spot for Raff from her time in the England squad. The problem was who she used to play for. Mum would never go for that. However, after Raff put her name forward on Instagram, who else could it be but Rafferty 11?

Side note: My mother eventually found out that Raff used to play for Chelsea after watching a women’s sports interview. It was only on because Ellen white was due to make an appearance. Damn my love for all that is EW. She was less than impressed (my mother not Ellen ) but I think I may have been forgiven now?

So all suited and booted, I was ready for the first match which was to be Arsenal. The following conversation occurred that week at work.

“What are you doing this weekend?’

“Watching West Ham Women now it’s easier to get to their games. They play Arsenal this weekend at Borehamwood”

“Where the hell is Borehamwood?!”

“Hertfordshire”. Got to go into London to go out again.”

“How the hell is that easier?!”

Well, dear readers, (I am going to assume plural and that it’s not just my mum being supportive), it wasn’t. With Euston being out of action that weekend my planned 6 hour trip was about to get much, much longer.

A friend of mine had some spare Chiltern Rail tickets so I just had to get my backside to Birmingham. In hindsight, I should have just got the coach straight through, but free is free is free, right? And I was grateful for the help. I jolted awake at a painfully early 05:30 am but we were away.

Having spectacularly mistimed everything I actually arrived at Borehamwood an hour and a half earlier than needed, and so began a wonderful love affair with my new team.

Firstly, despite the fact she should have been warming up, I got a thumbs up and a hug from Raff thanks to my new shirt.

‘Well that went well’ I thought. A little acknowledgement goes a long way with fans. I am sure others who have met their favorite players, like me, agree you buzz about it for ages.

The match itself was brilliant and, even though we lost, it led to a rather big revelation. As much as I loved City and as much as I adopted them and they adopted me, there is nothing quite like cheering on your childhood team.

I thought I would try my luck and get a picture with Raff. After all, I had her shirt. A few problems though:

Problem one: Would she be in any mood to seeing as we had just lost?

Problem two: I can’t take selfies to save my life and I had come on my own. Time to find a friendly steward, methinks.

Problem three: She was the other side of the pitch to me and walking away. Wait, come back Raff!

The interaction actually couldn’t have been nicer and I even managed to sweet talk Gillingham Women player (and Ex Hammer), Mollie Kmita, into taking the picture for me. 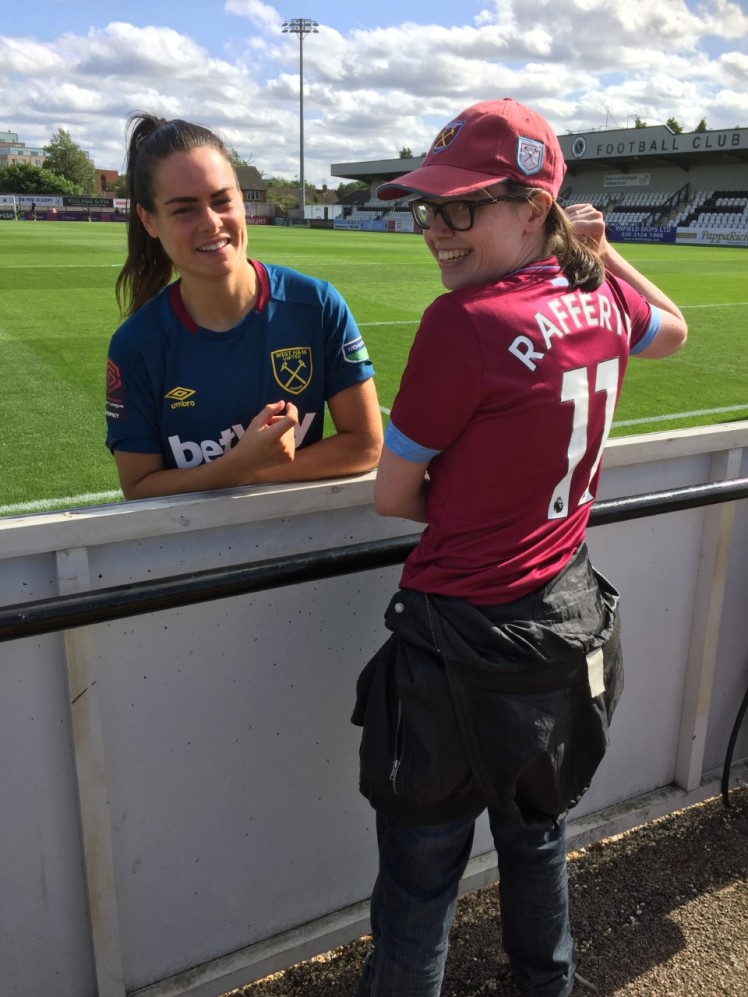 I was just about to leave when a nice lady told me that I needed to look after my Rafferty shirt. She laughed when I told her mum wasn’t too impressed with the ex-Chelsea choice.

It wasn’t until I was walking away that I heard Raff call her mum… oops. I guess I can’t have left too bad an impression, she follows me on Instagram. (If you fancy following suit, its axlsgirl90)😂

And so I started on my merry way back to Manchester knowing I had made the right choice in shirt and team and sport. And that was the end of my first West Ham Women mission.

Or so I thought.

Thinking it was a hard-luck tweet about the match, I opened Twitter. I was greeted with this:

Well I was half right.I’m not going to lie, I might have had a mini freak out in Marylebone station.

16 hours of travelling made totally worth it in one little Tweet.

And that is why I travel up and down week after week.

Next time we talk Arsenal in the league, how I stalked to Brianna Visalli for a wave. Finally, how the megabus let me down and I got stuck at the border of North and South

Follow Me!
All I see is motorways and non-league football grounds

Aren’t You Supposed To Ask Them For Photos?
Scroll to top